Director General of DMA meets Wassit governor and discusses with him the mine action in Wassit province / Zurbatya subdistrict ... 23 December 2021 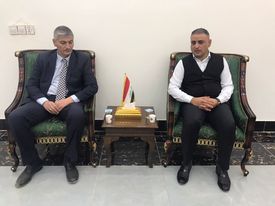 The Director General of DMA, Engineer.Dhafir Mahmood Khallaf met Wassit governor, Dr.Mohammed Jameel Al-Mayahi yesterday, Thursday, at the headquarters of  governorate, and discussed with him the mine action in  Wassit province /Zurbatya subdistrict.

The official spokesman of DMA stated that the two parties discussed the necessity to direct the official international and united nations efforts to clear the province from mines and explosive remnants of war, especially the border strip with Islamic Republic of Iran for the purpose of accelerating the development, investment and economic aspects and the reflection on the social and humanitarian life in those areas which were once an important resource for agriculture in addition to an economic tourist environment.

It is noteworthy that the D.G of Directorate for Mine Action, accompanied by the director of UNMAS as well as a high-level delegation from DMA, viewed directly the contamination reality that Al-Ta’an village suffered from it which was once an areas for military operations during the eightieth war, where the total area of contamination is approximately (12) square kilometers.